What a game this was; highly impressed.

Short and sweet. With an intriguing story that left me wanting more.

Everything is executed masterfully, and what amazing camera angles.

We need to see more from this world.

I was definitely frustrated at times but I still love it. Great use of ambiance and music to fill in dread and I can totally feel the Siren and Resident Evil inspirations.

Good horror game.Really I noticed great inspirations in the classic PSX games. It was a good decision, as I like the horror classics. Congratulations on your game.

I finished this game and honestly, I have to say I really like this style and I LOVE the art and music you guys made for the game. It has a nice aesthetic and I really think this game is gun.

(mac) It says I don't have permission to use it, I tried following manuals, videos, instructions, the actual mac guide, but i couldnt get it to open, please help!!

what version of macOS are you currently running?

im sorry if you've already gone over this, but is https://support.apple.com/en-ph/guide/mac-help/mh40616/11.0/mac/11.0 at all useful? otherwise i'm not entirely sure myself, as i've no experience with how running unsigned apps works anymore in macOS

aaahh!! its not an unidentified developer thing, i know how to fix that !! its this thing!! im the only administrator ,, i tried to follow the mac os guide butttttt it wasnt working, but thank  you for trying and if u figure it out notify me !! <3 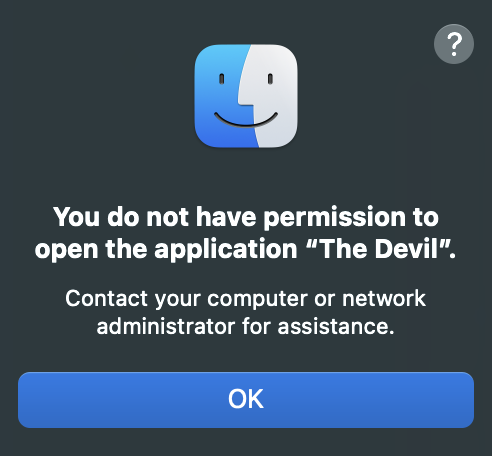 Is there anyway to fullscreen? I want to play it on my native resolution of 1920x1080... but for some reason it shows black bars on the sides for me :(

the game will only run in 4:3 resolutions, and will pillarbox if using widescreen monitors.

Ah dam... thats too bad, heard great things about the game but its currently unplayable on my monitor,  maybe u can add a "cheat" to allow widescreen?

sorry are you having an actual technical issue when trying to fullscreen or are you just annoyed it's 4:3

Well the game is fully playable...but like I said, the pillarbox thing when going to full screen on 1920x1080 makes it so half 1/4 of the screen is black on either side :(

Hi Otomon, tech lead here, I just wanted to give an explanation wrt why we don't support other aspect ratios. To put it simply, the boundaries of the camera change if you change aspect ratios, so things which should be off-camera would be visible. That might not be a big deal for an FPS, but for a fixed-cam horror game it can really effect pacing, suspense and combat.

(as an aside, this is one of the reasons why the HD Silent Hill remasters aren't as good as the originals: the change to 16:9 gave you much better visibility than the game was designed to have, and often made the camera angles uglier and less effective)

But! We could add an option to stretch the screen horizontally (sorta like when you play GameBoy games on a GameBoy Advance) if that seems like it would improve your experience. The characters would all look short and stubby though lol. But if that's a feature people want I'm happy to add it in the next update :)

Hey there, shoutouts to Big Flan. I really enjoyed this game and took the time to read some of these comments now that I've finished the game. I don't think this game is too difficult, as a matter of fact, I think it's just right in that department. My only real nitpicky issues are that the game is too short for there to be mechanics involving gun repair and workbenches. In my opinion (which I know you didn't ask for, sorry!), I believe gun jamming should remain, but that there should be a way to clear the jam without going to a bench. The entire first run through gives you more than enough ammo to make it through the entire game but I think my gun jammed within the first 20 shots. I also wish you would have let me shoot the Devil or the Source in the face, but I understand the time constraint you guys had so no issues there for me either.

Overall, thanks for making this and letting us play it. I'm going to follow you guys and I expect to see even greater stuff! Thanks again!

The Gameplay Trailer is amazing, but the MAC version is NOT working (I'm on macOS Catalina 10.15.7)

This is one of the coolest indie horror games that I've played! It really felt like I was playing Silent Hill 1 or the classic Resident Evils. Of course, I had to cheat because I kept getting bodied lol. This is a hidden gem though! I made a 3-part series.

My video on The Devil.

Cool short game overall, the setup is good and tense. I love the fact that characters are already menacing so when they turn on you, you begin to think about EVERYONE you've encountered so far that you'll now have to kill/evade and that was stressful.(I really freaked when I realized I had to go through the cafeteria again) I ran into a few bugs (fell out of world, blocked by stairs geometry) some of the paths where not easy to find.The controls are ok overall but OH BOY did I needed the cheats! I feel like the gun jamming is more or less a death sentence: there's WAY too many spots where you'll simply end up in front of a barrage of enemies you simply CAN'T get through (do people actually finish this without cheats?) I think the gun jamming is not a bad idea and adds lots of tension but it could have been for just a few pulls of the trigger or make you waste a magazine instead imo

This was an excellent game! Short and simple, but the buildup was great, controls were smooth, I love the minimal approach to the storytelling. So glad I got it!

This looks really great but I've got a bit of an issue, I can't hear anything, idk if I'm just being dumb or what.

actually it seems that audio doesn't work for me in any Unity game, so this problem is probably on my end :\

Ok I fixed it lol, turns out my audio drivers got all messed up so I had to reinstall them :3

Great game! Would love to see you guys do a follow up even if it's not related to this story.

Any chance of a linux build? I’ve heard highly of this game but can’t play it at the moment due to only having a linux installation.

In case anybody else is in this situation, the game can be run under Lutris with wine (flawlessly aside from the mouse cursor not hiding).

nice! did you used crocotile3d to create the scenarios?

We did use Crocotile3D, but only for two things: the pipe arrangements and mesh fences.

Originally we wanted to use Crocotile for level geometry too. But it was going to take too long, so instead Flan & I did the first pass in MagicaVoxel and then used Maya to edit that.

Really really love the concept here. On top of that the sound design is absolutely top notch. Unfortunately some of the gameplay mechanics really frustrated me, on top of the punishing difficulty. I'm so happy there was the inclusion of those cheats, as this allowed me to finish the game and see a conclusion I was definitely invested in. Enjoyable experience overall! Excited to see what you come up with next.

Thank you for playing and for the kind words!

Enjoyed playing this, for the most part. I really expected to spend more time in the swamp, but when I realized the route you were taking, I thought it was really clever. Things got really hard when my gun jammed super early (think I still had 35 shots?), but I managed to make it to the end without it.

My post below basically sums my thoughts outside of my commentary. Hope my playthrough is enjoyed. Interesting game -

RE2/RE3 Speedrunners would have a Feast if they knew about this game, very difficult with the limited ammo, tons of enemies, no health packs - trying to rerun through some a labyrinth, will be uploading a video soon. Unfortunately had to cheat due to the dodge-weave difficulty (Not complaining, just was never good at RE2/RE3 'rush/dodge/speedrunning'. But I fully appreciate the creativity behind the camera angles and artistic touch that such angles and perspectives brought to this world.

That's a lot of running, man. I was as good as dead as soon as the ammo ran out. i know there are cheats to help with that but that seems like a boring way to play.

I wonder what happened to the other lifter?

The beginning gave me chills as I played through  the first part! It was apart of my 2 games one play and man!!! Spooky factor was also there. Love how the atmosphere changed from good to chaotic plus I died very quickly without cheats. Wonderful game

Great stuff, thanks for making this!!

Here's a complete playthrough of The Devil:

Very clever twist, getting used to the level design and people on the way down then coming back it's flipped! I ran out of bullets and health, had 40 or so bullets and couldn't find any on the way back so made it really intense so I just booked it. Little did I know, there are cheats here. The checkpoint is too far away, but now I know I can use cheats, should be a breeze lol.